Ben: “All I care about is wins and Super Bowls”

Home/News/Ben: “All I care about is wins and Super Bowls”
Previous Next

Ben: “All I care about is wins and Super Bowls” 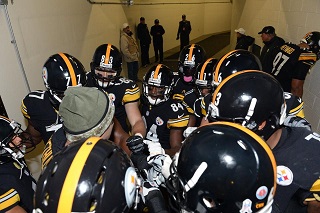 Ben Roethlisberger stood in a quiet hallway outside the locker room early Monday morning, the roars from the big crowd at Heinz Field on Joe Greene Night still ringing in his ears. He had just set an NFL record for the second consecutive game, yet he wanted to talk only about the 43-23 win against the Baltimore Ravens, the Steelers’ 6-3 record, his linemen, wide receivers and running backs, the defense and special teams, “Mr. Greene” and the “awesome” fans. It seemed like the right time to ask: Would it really hurt you to toot your horn just a bit?

“There is no point in doing that,” Roethlisberger said. “This is the ultimate team sport. I’ve told guys before: ‘When you can score a touchdown on the football field by yourself, then you can celebrate and be that guy.’ It’s impossible to do. It’s a team game. It’s just fun for me to go out there and play ball with these guys.”

The best ball of his Hall of Fame-caliber career, actually.

Roethlisberger has led the Steelers to two Super Bowl titles. He still beats himself up for not playing better in a 31-25 loss to the Green Bay Packers in Super Bowl XLV. Since he came into the NFL in 2004, his goal has been to win five championships, breaking Terry Bradshaw’s franchise record of four.

If Roethlisberger keeps playing this well, the Steelers will have a shot at getting to Super Bowl XLIX in February. Or maybe not. He said he has to play a lot better than he did against the Ravens.