From an article written by JoAnne Klimovich Harrop at the Pittsburgh Tribune-Review today:

It is not uncommon to see Steelers quarterback Ben Roethlisberger and fiancee Ashley Harlan stay after Sunday service at Christ Church at Grove Farm in Ohio Township, mingling with parishioners where the couple will marry this weekend, a pastor at the church said.

“Ben and Ashley have been very consistent and genuine in their worship,” the Rev. Bruce Cote, senior associate pastor and interim lead pastor, said Sunday. “I often see them talking with other people before and after services.”

The couple joined the church about a year ago. After they did, a letter was sent to parishioners asking them to treat Roethlisberger like any other member. Cote said it is hard to know what Roethlisberger goes through, being such a popular sports figure, but added he and Harlan have embraced the church community.

“That is refreshing,” Cote said. ” ‘Good job’ I say to how they handle themselves.”

One of the greeters said yesterday that Roethlisberger and Harlan are a wonderful couple who attend service weekly when they are in town and that both come from Christian households from which their foundation of faith was formed. 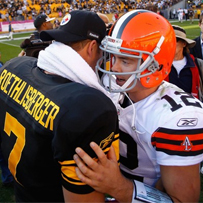 McCoy was encouraged by Steelers quarterback Ben Roethlisberger after the game, won by Pittsburgh, 28-10.

McCoy writes that Roethlisberger said, “Great job. I thought you played well today. Keep your head up. You’re going to be a great player.” — From the Cleveland Plain Dealer‘s Tony Grossi, on his book review of “Growing Up Colt — A Father, a Son, a Life in Football.”