Home/News/Ben: ‘Basketball was always my first love’
Previous Next 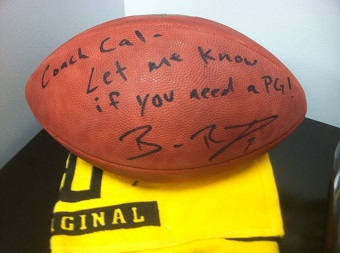 Hey Steeler Nation, your QB averaged 26.5 points, 9 rebounds, and 5 assists in high school, which more than likely prompted this question from Coach Cal –

Coach Calipari: Let me ask you this, what if I were at Kentucky, and I said, ‘I’ve gotta have this guy,’. And I’d sit you down, and tell your family, ‘Look, your kid is special. He’s a big guard, and I love big guards, you know.’ What would you have done? Would you have dropped the football and come to Kentucky?

Ben: It would have been a tough one for me. I went to Kentucky football camp back in the day when I was a junior. Went there and was a part of that. But, you know Coach, I’ve got a lot of love and respect for you, so I probably would have went. I would have stayed longer than a year too. I would have given you my best and I promise you, I would have passed the ball a lot.


Coach Calipari: So Miami of Ohio…was it because it was close to home? Did Ohio State just not know about you?

Ben: I took an unofficial visit to Ohio State and saw Coach Cooper was there, and you would have thought I was greatest thing since sliced bread. You would have thought I was the greatest recruit of all time. He couldn’t wait for me to come. I saw him at the airport the next weekend when I was flying down to Duke. We’re talking seven days later, and he didn’t recognize me. I went up and introduced myself and he didn’t know who I was. That was the end of my Ohio State days. I was going on the next weekend to Ohio State and I canceled it.


Coach Calipari: I didn’t realize that New England and Pittsburgh…is there a hatred there? It is, you know, we’ve been there, you’ve been there and let’s go. I know there’s respect but…

Ben: I’d say there is more respect than hatred. I don’t think there is a hatred there. We’ve played them twice in my 13 years in the championship game. Obviously, they’ve gotten the better of us in two championship games. They’ve kind of had our number. We’re like the little brother trying to keep up with the big brother, in a sense.


And who does Ben get his competitive spirit from?

Ben: I think I get it from my grandma!


Will Ben watch the Super Bowl? Who does he think will win? Does he ever change play calls? What does he think of Coach Tomlin, and what kind of relationship do they have?

You’ll want to listen to his full interview here.


Photo: Coach keeps his autographed football from Ben in his office.