Home/News/Ben: Playing every game like it’s his last
Previous Next

Highlights from Ben’s Wednesday chat with the media: 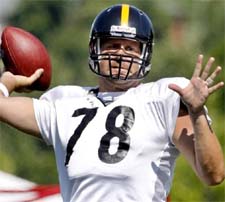 On the return of Max Starks –

“It’s good to have Max back. Max is a friend. It took a little while but we got him back and I’m happy for him.”


On what Max Starks brings to the team –

“It’s just his attitude, he brings a fun, healthy attitude, upbeat, he seems to always be smiling and in a good mood. I think he can help Marcus [Gilbert] and some of the other guys, if he’s playing or if he’s not, just his knowledge of the game.

I think as awesome as my wedding was, it was probably a bad thing for some of these guys because the coaches and people got to see how big some of them got. But you know what, it was a difficult off-season, difficult for everybody. No one really knew how to prepare and at the end of the road, he’s here.”


On his sprained left foot –

Ben will wear a shoe one size larger on his left foot, with a steel plate in the bottom.

“We’ll do our best, just take it day by day and see where it goes. If it’s just a pain tolerance thing, I’m going to be out there. I can deal with pain. We just want to make sure structurally it is sound.”

“If you can ever find me saying that someone hit me dirty, I would give you a Snickers bar. I don’t ever complain about those things I just go play the game because it doesn’t do anything to go complain. I have played with broken bones so if I complain, it’s not like the next week the officials are going to start throwing flags. It doesn’t do any good to complain, so I just play the game.”

“Well I think we have a lot of factors that contribute to it and I think that’s a good thing. No one is pointing any fingers at anybody, I will point some at myself and take a lot of the blame for the sacks and me just trying to make plays. The guys know that, I have talked to the linemen about it and to not take the criticism too harshly and too hard on themselves because it’s not on them, it’s on me.”

“I hope that’s always their goal. But it’s hard. I play the game a certain way and I don’t want to change that. People talk about getting the ball out of your hand faster, do this and do that. But I’ve been playing this game pretty successfully, this is my eighth year and I’ve done a decent job, we’ve done a good job and the line has done a good job. I want to make sure they don’t get too much blame because a lot of it is my fault. We’ll just play the game the way we know how.”


On whether he has considered changing the style of his play –

“When I go out at the start of the year I play every game like it’s my last. If this is my last year, this is my last year, that’s the way I play the game. I’m going to go out and play it. We’ll all go out and do what we have to do to win. If guys have to play hurt, they do that. That’s the motto in this locker room and on this team, guys suck it up and if they can’t the next guy steps up and does a great job.”

“What doesn’t? You have to find No. 31 Finnegan, he is a really good player and is all over the field. I think for them it really starts up front, though. They have a really good defensive line that really gets after the ball.”


On the team getting back on track –

“You always want to win games, we lost a close game on the road against a great team. That happens, we are 2-2, and we are only one game behind the best team in the AFC. We always of course want to win and it’s really nice to be at home. We are playing against a great Titans team we just have to be ready.”

For more from Ben’s conference call with the Tennessee media, click here.