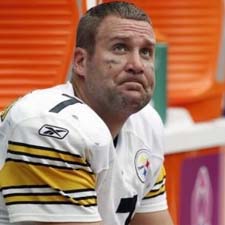 Ben had X-ray taken of his left foot after the game and is expected to have an MRI. He said the injury occurred on the second-to-last series when he was tackled from behind. He remained in the game but had trouble walking afterward in the locker room.

Ben told the media that it’s too early to tell if he will be able to play next Sunday when the Tennessee Titans come to Heinz Field.

“I don’t know. I’m still worrying about this game. It’s still too fresh in my mind to worry about next week yet.”

Ben said the loss boiled down to “just making plays, plays I didn’t make, plays I could have made. We had a group of linemen, offensive guys who we were plugging around all over the place. I gotta step up and make plays, and I didn’t do it today.”

But he isn’t pushing the panic button.

“We’ve been down this road enough times that we know it’s about when you get hot. If we can pull together, offense, defense, special teams, and get hot at the right time that’s all that matters.”

He had plenty of company in the injury department today – Aaron Smith, Rashard Mendenhall, Jason Worilds, and James Harrison were also sidelined in the loss.


More from the AP:

Roethlisberger limped into the locker room about 20 minutes after the game with his arms draped around a pair of Steelers employees and an ace bandage and a bag of ice wrapped around his injured foot. He sat alone at his chair with his head down and looked to be gazing at his foot for several minutes before putting on the walking boot to limp to the showers.

The Steelers were without two regular starters on the offensive line Sunday. Roethlisberger has now been sacked 14 times this season and hurried 22 other times.

Still, he didn’t blame Sunday’s problems on his line.

“I’ve still got to make plays,” Roethlisberger said. “I’ve got to make it easier on my guys and I didn’t do that today.”

You can watch video of Ben’s post-game interview here or read his comments here.

Ben’s MRI today on his left foot showed no broken bones. The foot is still somewhat swollen and sore. There is not word on whether Ben will be available for Sunday’s game yet.