“I’m going to do my best to get back there”

“I’m going to do my best to get back there”

“I want to get one more than anybody else. This would have been a great step, but now I feel I took a step back. This will haunt me until I can win another one…until I win another one, it’ll haunt me a lot.” — Ben, to Ed Bouchette of the Pittsburgh Post-Gazette.

From an interview with Ed Bouchette, that appeared in the Pittsburgh Post-Gazette today: 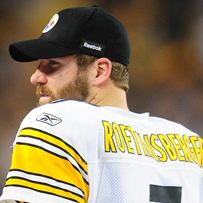 Ben Roethlisberger has your typical game room for a pro athlete, complete with memorabilia that includes the two nameplates over his locker from each Super Bowl victory.

The nameplate from his most recent Super Bowl appearance also has a place of honor — in his bathroom.

“The day I got back, I took my nameplate from my locker — ‘Ben Roethlisberger, Super Bowl XLV’ — and it’s sitting underneath my mirror in my bathroom. I want to see that every day. It hurts a lot.

“To see that every day is just motivation for me to work out, to bust my butt to not let it happen again because I want to be a champion. And, right now, I’m not a champion.”

If this is the halfway point in Roethlisberger’s career, getting to another three Super Bowls and winning two of them would go down as quite an accomplishment.

“That’s what I want to be known for,” Roethlisberger said, “winning games, winning Super Bowls.”