“He knows we have his back on and off the field, and a lot of us feel like that, so when you’ve got your brothers playing around you, it’s kind of like backyard football. That’s he how feels. We know how much he does for this offense, so the consensus this year is we’ve got to play our (butts) off because we know that he’s going to lead us to victory.” — Teammate and friend Willie Colon, from the interview. 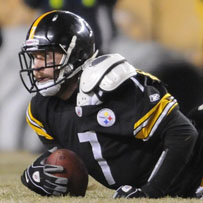 Excerpts from the interview:

Mr. Brown: How long can you continue playing with all of the punishment you have absorbed?

Ben: You know what, people have asked and honestly I don’t know how long until my body says no or the Lord says no. I’ve told my closest friends, I’ve told my wife, I’ve told my agent, “Don’t let me do what some of these other guys did, just keep forcing the issue.” When I’m done, I’m done. I don’t want to go to any other team. When I’m done here, I think I’m ready to walk away. I can’t think of a better team, a better franchise, a better city to walk away as a part of your whole life.


Mr. Brown: Why can this team win the Super Bowl?

Ben: We’ve got a really good, veteran group and a bunch of young guys on offense that just don’t know any better than to just play as hard as they can and as fast as they can. So I think we’ve got a lot of potential on both sides of the ball, and the sky’s the limit for us. We’ve had some good (offenses), but as a collective group this one is pretty daggone good because you can mix in a lot of young guys.

The earlier interview can be read here.