ESPN The Magazine: “One Day, One Game”

Home/News/ESPN The Magazine: “One Day, One Game”
Previous Next

ESPN The Magazine: “One Day, One Game”

A story about Ben will appear in the November 28th issue of ESPN The Magazine (James Harrison is on the cover). 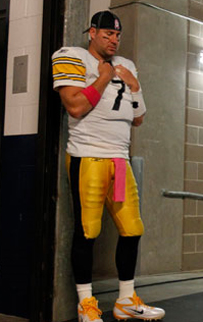 Writers Sarah Turcotte and Lindsay Berra take you through the Week 4 match-up between the Pittsburgh Steelers and the Houston Texans as they follow Ben from start to finish of the game.

Below is an excerpt from the article:

As fired-up Steelers bound out of the locker room in the bowels of Reliant Stadium, they’re careful not to disturb their QB. Ben Roethlisberger leans against a wall with his eyes closed, taking a final minute to mentally prepare.

The eight-year vet has won two Super Bowls and 32 road games, more than Aaron Rodgers has played. He thinks about how the crowd in the closed stadium will be loud. About his injured offensive line. And about how Texans OLB Mario Williams sacked him twice the last time they played each other. As the last Steeler passes, Roethlisberger breaks his trance and jogs out of the tunnel.

Then, just before kicking into a full sprint, No. 7 yells: “We rollin’, we rollin’.”


More from the story appears here.

There are five weeks left to vote!! Let’s get to votin’ for Big Ben.