Home/News/“No. 7 looms as No. 1 in toughness”
Previous Next 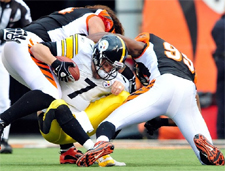 The news out of Pittsburgh is not good. Quarterback Ben Roethlisberger has a broken right thumb and is expected to miss …

Even Roethlisberger’s harshest critics have to admit he is as tough as any NFL player. If you want to call him the toughest, you’ll get no argument here. It’s hard to say with any certainty that he would keep playing with Schaub’s injury or Cassel’s. But would you bet against him?

“You know me, if I can be out there, I’ll be out there,” Roethlisberger often has said. “I’m always going to fight for my guys right up to the time they carry me off on a stretcher.”

That happened once. It’s surprising it hasn’t happened a bunch of times, considering Roethlisberger has been sacked 336 times — including postseason games — and hit countless other times in his 7 1/2-year career. In the final regular-season game in ’08 against Cleveland, he was carted off with a concussion.

Roethlisberger has missed just six of 134 games because of injury or illness. There have been many times when we’ve wondered how he picked himself up off the ground — or a hospital bed — to play…


You can read the rest of Mr. Cook’s column here.