Home/News/Ben in New York
Previous Next

…today to help Nike and the NFL with the unveiling of their new uniforms!


“It is not the old mesh, it breathes really well.” — Ben, on the lightness of the new material.

While he was there he obliged the media in attendance with interviews – questions ranging from his thoughts on the upcoming season, on the retirement of Hines Ward, on his new OC, on horse-collar tackles, and on the new uniforms, of course.

From the blog Steelers Gab: 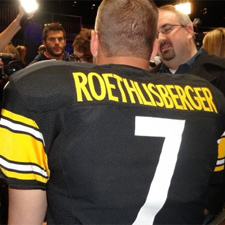 Ben Roethlisberger has always been the center of attention in the Steel City, and Tuesday in New York City he along with 31 other NFL players were on hand to debut their teams new Nike NFL uniforms.

While the Steelers uni didn’t change much, Ben said that he liked the fact it’s a little lighter than that of the old Reebok unis.

“It’s a lot lighter and more comfortable in games, so late in games your going to feel like your not wearing anything,” Roethlisberger said.

Pittsburgh Steelers quarterback Ben Roethlisberger says he looks forward to working with new offensive coordinator Todd Haley. Reports of a chilly start between them are “overblown,” he says.

“People have made such a huge deal of (Todd) and I not communicating. He’s got to move, he’s got five or six kids. It was just a simple comment — I haven’t talked to him yet — and it was blown way out of proportion. There is no ill feeling, or hard feelings or anything between us.”

“People try any way they can to get me down, and that’s been a popular way sometimes,” Roethlisberger said. “But as long as I don’t get hurt I’m OK with it.”

You can read another interview with Ben from the New York Post here.

More of Ben’s comments can also be read at ESPN.com.

You can watch a video of the uniform unveiling with interview clips of Ben at NFL.com.

And back in Pittsburgh:

If you haven’t seen the latest fan photos from Sunday’s autograph signing event in Virginia, you can check them all out here (pages 1 & 2).