Ben is ‘back to zipping the pigskin around the park’

Ben is ‘back to zipping the pigskin around the park’

“It’s leaps and bounds different from when we first started. He’s been working hard, and it’s been cool to be a part of that process and just to see him put his mind to coming back, just to see that tenacity has been neat to be a part of.” — Ryan Switzer. 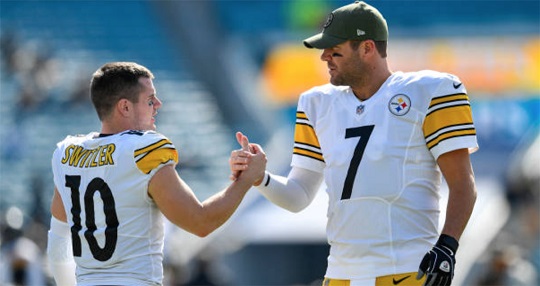 From Kevin Patra at NFL.com:

While the focus the past several days has been on Ben Roethlisberger’s hair trim, the velocity of passes thrown in his session with teammates is the more relevant aspect of Big Ben’s recent video release to Pittsburgh Steelers fans.

Coming off elbow surgery, the quarterback has been cautious with his rehab, taking it slow especially, with offseason workouts being wiped out due to the COVID-19 pandemic.

Now, however, Big Ben has ramped up the RPMs.

Wideout Ryan Switzer, who along with JuJu Smith-Schuster and James Conner worked out with Roethlisberger, told The Athletic that the quarterback is back to zipping the pigskin around the park.

“You know, like when the ball cuts through the air and you can hear that ‘pfft-pfft-pfft’ sound?” Switzer said. “That’s what JuJu said it sounded like. I didn’t hear it but, man, I have been trying to catch with no gloves for a couple of months to build up these callouses, but ask my hands how they feel catching his throws.”

Roethlisberger said earlier in the offseason that he’d been holding back during rehab to strengthen the elbow without overworking the injury. According to Switzer, there was no down-throttling from Big Ben in the most recent session.

“Man, he let it rip. There was no restraint, no hesitancy, he was just out there. He has been throwing like that for a while and, in my opinion at least, getting out there on that field for the first time and throwing full-speed routes was refreshing. The control factor was taken out of it. He was out there and he was throwing. Did some off-schedule stuff. No restraints. He threw everything — across his body. Everything.” — Ryan Switzer.

Switzer began catching passes from Big Ben in February, so he knows how far the quarterback has come in his rehab.

“Somebody with the accolades, has all the money in the world and to have an injury like this and to see that drive … I think a lot of people would be like, ‘You know what I have accomplished everything I wanted to accomplish and I have the money, what am I doing?'”

Switzer’s review of the throwing session is just the latest indication that Roethlisberger’s return is on track.


You can read more from Mr. Patra here.