Ben is the ‘Steelers Digest Player of the Week’

Ben is the ‘Steelers Digest Player of the Week’ 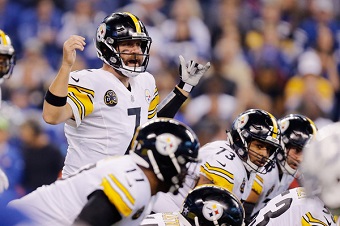 Roethlisberger was more than a facilitator when his team needed him to be.

Earlier this week, quarterbacks coach Randy Fichtner referred to the role Ben Roethlisberger has assumed is that of a point guard in basketball, with the implication being that he is now a distributor of the ball. There were times today against the Colts when Roethlisberger was distributing the ball, but there were other times, particularly in the second half, when he looked like the guy he was a decade ago. Shrugging off tacklers, moving around in the pocket, extending the play until he could find someone to get the ball to.

Which is why the Steelers came back from a 17-3 deficit to score 17 unanswered points in the final quarter-and-a-half to defeat the Colts, 20-17, at Lucas Oil Field.

As the Colts were building that 17-3 lead through the first couple of minutes of the second half, Roethlisberger completed 7-of-15 for 72 yards, with no touchdowns, one interception, and a rating of 33.2. He also was sacked once. In the second half, he completed 12-of-16 (75 percent) for 164 yards, with two touchdowns, no interceptions, and a rating of 146.9. He was not sacked in the second half, but that’s not to say there weren’t occasions where he was under some pressure, and also his those statistics don’t reflect the two-point conversion pass he completed to Martavis Bryant from the 7-yard line that tied the game, 17-17, with 11:52 remaining in the fourth quarter.


You can read more about his selection here.