“Honestly, what’s our record? What was the final score? Those are the only things that matter. I couldn’t tell you what I was for what, I know I threw an interception, I know I had two touchdowns, that’s all I know. But I know we won the game, I know where our record is and I know that’s the most important thing.”

Recap from Ben’s show this morning on 93.7 The Fan: 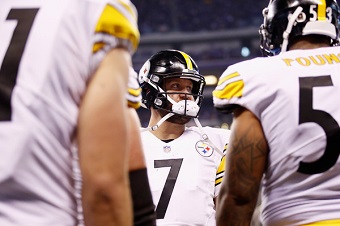 Another game on the road against a team under .500 and another game that the Steelers easily could have lost, but they didn’t and they beat the Colts 20-17 on Sunday.

Ben Roethlisberger joined us on The #1 Cochran Ben Roethlisberger Show to talk about winning ugly and how it was good to come out with a win it that situation as opposed to what happened when they went into Chicago earlier this year. Ben was asked about Tomlin pointing out the negatives from the game despite getting a win.

Ben also addressed this moment in the game where offensive coordinator Todd Haley wasn’t too happy with him as they took a delay of game penalty when going for two.

“That’s nothing new, him screaming at me during games, you guys don’t ever see it. I don’t know if he was actually yelling at me through the headset because I didn’t hear that, but I did look over to the sideline and he was definitely screaming…I know there was some coach-to-coach arguing, him hollering, all kinds of things, but at the time, you move on, you can’t really get caught up in that stuff.”

The team may have come out of Indianapolis with a victory, but they didn’t come away unscathed. Ben talked about the fractured fibula cornerback Joe Haden suffered and how much his absence will mean to the defense.

“Ya, it stinks…Everything I’ve heard and talking to him, he’ll be back. Like you said, it is unfortunate because he’s been playing so well and really been kind of a spark plug for that defense, once again, thank you Cleveland.”

Ben also took some time to look ahead at the short week they’ll be on as they prepare for a Thursday night matchup with the Titans.

“Ya, it’s miserable, it’s terrible, they need to get rid of this game I think. Just play on Monday’s and Sunday’s. It’s so tough on guys, you’re beat up, you’re banged up. It’s a very violent, physical game we play…you’ve got to let your body recover a little bit. Even a week, you’re still not fully recovered by Sunday to Sunday, you’re still dealing with bumps and bruises and things just continue to build up throughout the season. When you go on such a short week, man, it’s just not good. I don’t know many players that like it. It’s a tough thing to do, but you know, you’ve got to do what the league says.”

You can listen to today’s episode of his show here.