Home/News/Ben: ‘It’s fun to be back’
Previous Next 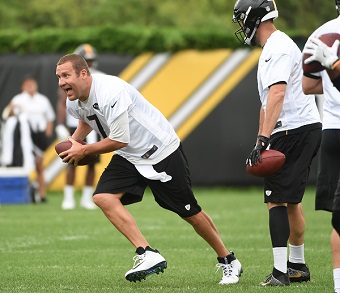 Yes, I know, it’s shorts and no pads right now.

But come on, it’s football and it’s something to be excited about.

The Steelers held their first of 10 OTAs at the UPMC Rooney Sports Complex on Tuesday, and it was almost a packed house for the voluntary session, with Le’Veon Bell being the only player missing as he is looking for a long-term contract.

Among the almost 90 players on the field was Ben Roethlisberger, who entering his 15th season is the most seasoned veteran out there. And, he was having fun being back with the crew.

“It was good to be back out here and be with the guys,” said Roethlisberger. “Have some fun with guys you haven’t been around in a while and see some new guys.

“It was fun today. It’s fun to get back out here. To be around the guys, to laugh, smile and throw the football around is always fun.

“I never would have heard the end of it from (Maurkice) Pouncey if I didn’t. Just to be out here to have fun. It’s Day 1. It’s good to get out here.”

One of those new guys Roethlisberger spent some time with was rookie quarterback Mason Rudolph, who the Steelers drafted in the third round. Roethlisberger made some comments after Rudolph’s selection, questioning the need to draft a quarterback so high since he planned on playing another three to five years. He also made remarks about helping Rudolph, after the young quarterback said he didn’t want to bombard him with questions.

Roethlisberger clarified that there is no rift, his comments were taken out of context and meant in jest and that he plans on helping him any way he can.

“I’ve always done that,” said Roethlisberger. “I think people took some things into a context that I was going to be mean or rude. That was not it at all. If you listen to the whole conversation I said in jest, laughing and having fun. I have never been the type to be rude or mean to other quarterbacks. I’ve had a lot of quarterbacks through here that have been younger than me that I’ve tried to help any way that I can. I’ll continue to do that.”

He didn’t waste any time helping. Roethlisberger talked with Rudolph a few times, giving him some tips.

“I tried to help him out with a couple of things I saw out there. He hasn’t asked me anything yet, but I inputted my two cents,” said Roethlisberger. “There was a particular play he ran a little naked on and he was six or seven yards from Rosie (Roosevelt Nix). He threw it pretty hard at Rosie and threw it high, and Rosie didn’t catch it. I pulled him aside and said you’ll learn quickly every throw doesn’t have to be the hardest throw you can make. You don’t have to put every throw on guy’s chests as hard as you can. That’s a great opportunity for a nice easy touch pass. Just trying to instill things like that.”

While it’s just Day 1, Roethlisberger does like what he sees from Rudolph.

“He has a big arm,” he said. “Seems to understand the offense. Seems to not have any issues in the huddle. So I thought he did really well.”


You can watch video of Ben’s interview with the media here.