The end of each year brings award season and none handed out in the region are more prestigious than the Dapper Dan Charities Sportsman and Sportswoman of the Year Award. 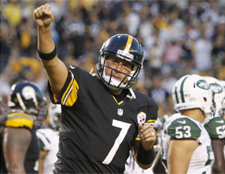 The awards annually go to the male and female athlete, coach or team that bring the most recognition to Western Pennsylvania and is voted on by fans as well as Dapper Dan’s executive committee.

The featured winners, along with a number of others, such as retired Steelers great Hines Ward, will honored at the 77th Annual Dapper Dan Dinner & Sports Auction, presented by BNY Mellon Feb. 6 at the David L. Lawrence Convention Center.

Tickets for the event can be purchased by visiting www.post-gazette.com/dapperdan or by calling 412-263-3850. Prices are $150 for general seats and $250 for premium seats.


You can read more on the honor and the event from Paul Zeise at the Pittsburgh Post-Gazette here.

*Winners will be announced in late January, 2013.