“Absolutely, one hundred percent. It’s on me. I let the team, the fans, everybody down.” — Ben, post-game 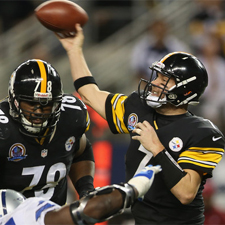 Few players have provided more important plays for the Steelers the past few years than Ben Roethlisberger and Antonio Brown, and they were at it again today.

Roethlisberger, their Pro Bowl quarterback, had thrown two touchdown passes, one of them to Brown, who fought through a defender to reach the end zone. He had more than 300 yards passing and he led his team from behind into a fourth-quarter lead against the Dallas Cowboys.

Brown, their MVP last season and Pro Bowl returner, took one punt back 29 yards and led the Steelers with eight receptions.


“Ben has made so many plays for this team, he’s the best player on this team, he’s our leader. I have no problem with it at all. Zero. Those guys leave everything on the field. I don’t have a problem. Those guys fight every single week. We all fight. We’re in this together. We could have made plays the whole game – everybody.” — Mike Wallace

However, both players made critical errors in the fourth quarter and overtime, each blaming themselves for the Steelers 27-24 loss, their fourth in the past five games that dropped them to 7-7, yet somehow still quite alive for a playoff spot.

But Roethlisberger and the Cowboys’ Tony Romo put on passing clinic and good quarterback play after a sluggish first quarter in which the Cowboys led 3-0.

Roethlisberger was 24 of 40 for 339 yards, two touchdowns and that one killer interception…