Ben on Bell: ‘He’ll Do Everything He Can To Get On That Field’

Home/News/Ben on Bell: ‘He’ll Do Everything He Can To Get On That Field’
Previous Next

Ben on Bell: ‘He’ll Do Everything He Can To Get On That Field’

Did you miss Ben’s radio show this morning on 93.7 The Fan? No worries, we have the highlights: 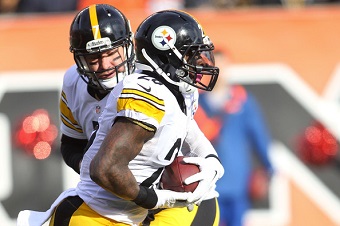 The biggest storyline coming out of that victory over the Bengals was the knee injury suffered by running back Le’Veon Bell that has his status for the first round of the playoffs in question. Roethlisberger addressed that injury and whether or not he expects to have the team MVP in the backfield this week.

“You know what, I’m not sure,” Roethlisberger said. “I talked to him a little bit yesterday, he seemed to be in good spirits, he seemed to be doing well, but I’m not a doctor so I can’t tell you exactly what’s going on. He’s going to have to just see how he progresses throughout the week. He’ll do everything he can I know to get on that field.”

If the team is without Bell, Roethlisberger gave us a glimpse into what the offense could look like.

“I don’t know if we’ll have to revamp it considerably,” Ben speculated. “We’ll get some runs that the other guys are best at, we’ll make sure that everyone is ready to go with maybe some no-huddle, more passing maybe, some empty stuff. We’ll see, we’ll kind of put together a plan and see how it goes throughout the week.”

When asked if the Steelers keep track of what the Ravens are doing like the Ravens keep tabs on them, Ben said he personally doesn’t worry about what their rivals are doing on a week to week basis. “I don’t, not unless we’re getting ready to play them…It’s got to be about you and about your team.” 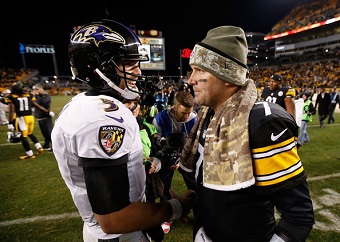 Ben also looked at what the future may hold for offensive coordinator Todd Haley as he’s leading one of the league’s top offenses and may be a candidate for one of the four head coaching spots already opened up across the NFL.

“He’s done it, he’s been there, he’s done that. I think it’s just a matter if he wants to,” Roethlisberger said. “He’s got one of the top…two or three offenses in the NFL. Shown that he can get it done. I think that the opportunities will be there if he so chooses, I think that’s just up to him if he wants to go.”

Roethlisberger even threw his support behind Haley and said he hopes the offensive coordinator chooses to stay.

“If he wants to go be a head coach then we’re going to be excited for him because that’s what he wants but on the other hand, we don’t want him to leave because we enjoy him here and we enjoy his offense and kind of what we’ve done this year and hopefully what we can do in the future.”

Things wrapped up this week on The Ben Roethlisberger Show with the quarterback talking about his best playoff win as he gears up for what they’re hoping is another deep playoff run this year.

“I kind of have to go back to the Arizona [Cardinals] Super Bowl,” Ben remembered. “As a kid growing up, I was Joe Montana in the backyard throwing touchdowns to Jerry Rice to win Super Bowls and to have that opportunity to throw a pass to Santonio Holmes in the corner of the endzone to win the game, that was my dream growing up and its got to be every boy’s dream that wants to play in the NFL.

You can listen to the podcast of his show here.


You can hear Ben every Tuesday throughout the football season as he joins the Cook and Poni Show on 93.7 The Fan for “The Ben Roethlisberger Show” at 11 a.m.