Ben on Heath: “He’s the best full tight end in the game.”

Home/News/Ben on Heath: “He’s the best full tight end in the game.”
Previous Next

Ben on Heath: “He’s the best full tight end in the game.”

From Ed Bouchette’s column this morning at the Pittsburgh Post-Gazette: 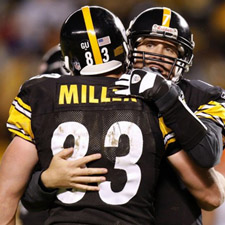 [Heath] Miller has set up in the backfield as a receiver more than ever, continuing an experiment that began last season. Grisham has been a favorite target of quarterback Ben Roethlisberger in camp, continuing another trend from a year ago, and likely will take departed Antwaan Randle El’s spot among the group of wide receivers.

Miller’s teammates believe he is the most complete tight end in the league and, at 6 feet 5, can be more productive as a receiver if need be.

“It’s really just taking a halfback out and getting an extra receiver in,” Roethlisberger said. “So I think we evolved a little bit. We did it a little bit of it last year but you’re going to see a lot more of it. We have different packages. We have to get him in there, we have to use him.

“He’s the best full tight end in the game. Nothing against Dallas Clark, Antonio Gates and those guys, but they’re receivers playing tight end. Heath is the best because he can also block. He blocks defensive ends sometimes; we ask him to do that, and pick up blitzes. That’s why he’s so special, he can do whatever we want. He’s an extra lineman and a receiver. I see a big year ahead for him.”


You can read more from Mr. Bouchette’s column here.

You can watch video of Ben’s interview with the media today here.

You can see the latest training camp photos here. 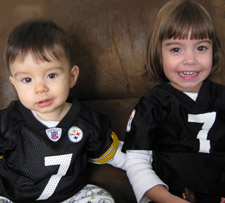 Lots of Lil’ Fans and a big fan too!

A few new photos have been added to both the Lil’ Fans album and the Fan Photos & Stories album.

Thank you to the Beall family (that’s 7-month old Benjamin and his big sister Kendall in the photo), the Labolito family, the Lydon family, and the Ritter family for sending in photos of your lil’ fans.


And thank you to Sami for sharing your photo with Ben at training camp!