From Scott Brown’s camp report at the Pittsburgh Tribune-Review: 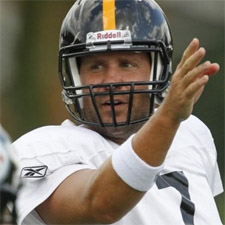 The first-team offense looked sharp during a two-minute drill that was one of the highlights of practice. Quarterback Ben Roethlisberger needed just three plays to get the offense into the end zone after it had started on its own 40-yard line. He hit tight end Heath Miller on a seam route and then dumped the ball off to wide receiver Arnaz Battle for a short gain.

That set up the pass in which Roethlisberger looked right and then left, finding Tyler Grisham, who had slipped behind the secondary, for a 40-yard touchdown.

“My arm feels good,” Roethlisberger said. “Physically, I feel pretty good, and I think a lot of the guys feel pretty good as well. I think we’re right where we would normally be.”

The Examiner‘s Cristina Rivers reports on team leadership at camp:

Leadership from veterans isn’t a new thing for the Steelers. In fact, every year at training camp, veterans have taken opportunities to advise, demonstrate and prep younger players.

Ward said, “Looking at our wide receiving corps…great talent, we have no experience.” Meanwhile receiver Tyler Grisham has also stepped up his game. Although Grisham isn’t the tallest receiver the Steelers have to choose from, Roethlisberger has shown that he finds him an appealing target.

Roethisberger admits that having the veterans lead the younger players with such a strange off-season is a blessing in disguise. “It is unusual circumstance we are in,” he said. “We have veteran guys who have been here and done that before. The off-season was almost beneficial to the guys. It’s something where we can step up and be ready to go.”


You can read more from Ms. Rivers here. 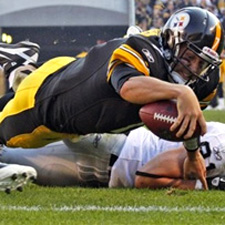 Their intent is noble, considering the current gold standard for measuring quarterbacks is the antiquated Passer Rating, an incomplete system devised in the 1970s that ignores important factors such as fumbles, sacks taken and rushing yards. The problem is that ESPN’s magic math, officially dubbed Total Quarterback Rating, has produced results that stupefy and confound.

Undaunted by the alternate reality they’ve created, ESPN calls their Frankenstein an “uber-stat” that is “comprehensive and meaningful.” The last word is key. The system was designed to take into account the meaning and weight of game situations in order to derive each quarterback’s “contribution to a team’s chances of winning.” So it’s quite curious that ESPN’s formula doesn’t seem to think much of the quarterback with the fourth-highest winning percentage in NFL history…


You’ll want to read more on the subject from Mr. Conboy here.

Ben will do a one-on-one interview with KDKA‘s Bob Pompeani.

Thursday evening at 6pm will be Part I of a two-part interview.