Ben was a call-in guest on the WDVE Morning Show today at 9:15 A.M.


Some highlights from his interview: 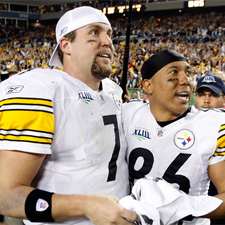 On Hines’ decision to retire as a Steeler –

“I’m actually kind of shocked and surprised, but glad. When he came out and said he had years left, I believed him! He’s a competitor, he can ‘go’. I thought he was going to go somewhere else, that would have been really tough to see. But for him to end it this way, as a Steeler – it’s very fitting because that’s what he is, he IS a Pittsburgh Steeler.”


On the effect Steeler Nation has on the players –

“You’ve heard me from day one say that I want to be a Steeler for life. Hines was so lucky to be a Steeler for life. So few players nowadays get to stay with one team their whole career, if it’s a long career. As I’ve said many times, we have the best fans in all of sports – that’s every single sport, not just the best fans in football, that’s a given – but in all sports. We go out and play for the fans. Hines said it the best, we play for the fans.”


On the expectation as a Steeler to win Super Bowls –

“If we don’t win it, it’s not, ‘Oh yay, we went to a Super Bowl. Congratulations.’ No! We’re [ticked], we can’t sleep. We thing about it, we have nightmares! We demand the best from each other and the fans demand it. We demand the best of our fans and that’s who we are.

“I think it starts at the top. We want to make Mr. Rooney and the Rooney family proud.”


To listen to Ben’s full interview which includes more talk of Hines, a discussion on Mike Wallace, Brett Keisel, and on being a veteran leader of the team, click here.