When asked about Ben’s role as far as leadership, Rooney said he already considers Ben a team leader, “He will be somebody that perhaps is looked to more now than in the past. Maybe that leadership role will grow as we move forward.” — From Scott Brown, Pittsburgh Tribune Review, on twitter after his interview with Mr. Rooney today. 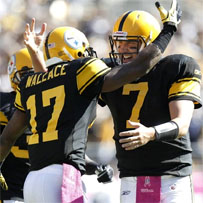 The Steelers want to sign wide receiver Mike Wallace to a long-term contract, though team president Art Rooney II said today that he doesn’t know when a deal might get done.

“The sooner the better as far as we’re concerned but there’s two parties to it,” Rooney told the Tribune-Review.

“We’ll have to see what we agree on so I don’t want to put any particular time frame on it or restrictions on it because these things take time and I wouldn’t want to box myself in on it.”

What does Ben think of Wallace returning to the Steelers?

From his interview earlier this week with the DVE Morning Show:

“I communicate with Mike, I wake up every day and I’m like, ‘Mike, please don’t go anywhere. I’m begging you.’ I’m going to say right now over the radio ‘Don’t go anywhere Mike.’

“Mike is too good of a player, but Mike’s an even better person. He’s a great teammate, he’s a great guy, and he’s someone that we need to have here. I’ll be disappointed if he goes somewhere. I’ve got a good feeling that he’s not. I don’t know what it is, but I’ve just got a feeling he’s not going to go anywhere, but I’m still begging every day and praying that he doesn’t go anywhere.”


If you missed his interview you can listen to it here.

Mr. Whitfield and his use of lawn tools… 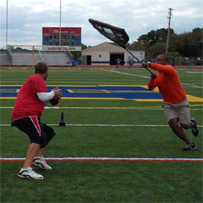 Andrew Luck showed he could do it all at Stanford’s Pro Day on Thursday: throw a 70-yard pass, throw the out pattern, hit a receiver in stride, even avoid the pass rush.

A pass rush that was tall and long, persistent and bristling.

Okay, okay, so the pass rush was really a broom, a Home Depot sale item that quarterback guru George Whitfield was waving around in Luck’s face. But Luck still avoided it.

Whitfield — who worked with Cam Newton last year and has been helping Luck prepare for the draft — harassed Luck with the broom on about half his throws.

It must have been unnerving for the Colts to see their new toy batted around like a piñata, but Whitfield said the broom allows him to manipulate the way the quarterback has to move. When he worked with Ben Roethlisberger (photo), Whitfield wanted to simulate his pocket feel and adrenaline rush.

“So I went out and got one of those giant plastic rakes, lined it with foam, wrapped it in bubble wrap and went after him,” Whitfield said.

You can see a larger version of the photo here.

…these two photos of Steeler Nation families at their finest!

And a special “Shout Out” and Happy Birthday this weekend to… 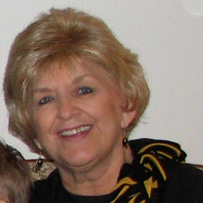 From her daughter, Diana: “March 24th is Ellen Jean Washlock’s 65th birthday! She is a lifetime Steelers fan and a true fighter against cancer. Four years ago Ellen was diagnosed with Uterine Cancer and was tested successfully at the Cleveland Clinic. Seventeen months ago she was diagnosed with a rare cancer called Peritoneal Cancer, and was given a dim outlook. After going through kidney dialysis, a blood clot in her neck, and two forms of chemotherapy, Ellen was in remission. After six months of no chemotherapy and feeling awesome, Ellen found out that her cancer has returned and is now re-starting chemo this week. Her family and friends are amazed at the positive outlook Ellen has for life. She is truly a fighter in every sense of the word and is loved by so many wonderful people in her life, including her husband, three children, three grandsons, and one truly special granddaughter- to- be who is being named after her beautiful grandmother. Prayers go a long way and we know that Ellen is in the best care possible…Happy Birthday!”