Home/News/Ben on WDVE
Previous Next

“I’m always trying to go out and be the best, and do what I can. I don’t think you have to change that up.” — Ben, from the interview. 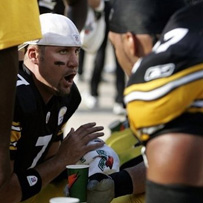 Ben spoke to Mike Prisuta on 102.5 DVE today on his definition of being a leader and how he goes about it.

You can listen to the interview here.

From Ed Bouchette’s column in the Pittsburgh Post Gazette:

“I’m sure B.A. probably feels pressure whether it’s from the fans, the media, the coaches — wherever it comes from — to run the ball,” Roethlisberger said of his coordinator, Bruce Arians. “That probably puts him in a little bit of a bind.”

Roethlisberger added that the ratio of runs and passes are right where they want them.

“I don’t know any quarterbacks who want to run the ball all the time. But I’ve always said let’s be balanced. I’ve never been one to say let’s go out and throw the ball 60, 70 percent of the time. Let’s just be balanced, 50-50.”

From an interview with Ben for the Raiders Notebook in the Mercury News:

Six wide receivers went in the first round of the 2009 NFL draft, including Darrius Heyward-Bey to the Raiders at No. 7, the first receiver selected. The Steelers just might have found the best of a receiver-rich draft with Mike Wallace in the third round.

“Whenever you can get a guy like that, it’s special,” Steelers quarterback Ben Roethlisberger said. “You find a guy that wants to be great without all the attitude.

“He’s a guy that, every day you go out it’s never too big for him, he never lets it get to his head. He really is just a great guy. He’s humble and, as a quarterback, you love that. You love a receiver that has a fire and wants to be great but is humble about it.”


You can read the rest of their Raiders Notebook here.

Want to give a “shout out” this weekend to Big Ben fan Gerald Williams of Richmond, Virginia! Gerald, thoughts and prayers go out as you continue to fight and stay strong!