“He’s not like most quarterbacks. In fact, very few are that big, that tough, and that willing to lay it all out there to get in the end zone.” — Former NFL quarterback and current CBS color commentator Dan Fouts, during the game.

“Big Ben delivered today. Ben was freestyling a bit which seems to be when he’s at his best.” — Former NFL wide receiver and current NFL Network anchor Tom Waddle, after the game. 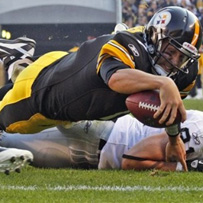 From the Sporting News:

Steelers QB Ben Roethlisberger is finding a rhythm, trusting his receivers more and gaining confidence. Getting seven men involved the passing game Sunday and then also making a decisive run to the end zone, Roethlisberger played well in the face of a good Oakland pass rush. He has his mojo working just in time for facing the Ravens in a potential Week 13 shootout with Joe Flacco.

The Steelers crushed the Oakland Raiders today in a rough-and-tumble throwback game that looked more like their heated rivalry from the 1970s.

Roethlisberger threw three touchdown passes and ran for one to lead the Steelers to a 7-3 record.

Roethlisberger threw touchdown passes of 52 yards to Mike Wallace, 22 yards to rookie Emmanuel Sanders and 16 yards to Isaac Redman, and the quarterback also scrambled 16 yards for a score as the Steelers (7-3) bounced back in a big way after being rolled over by the New England Patriots 39-26 at Heinz Field the previous week.

For the Fantasy Football fanatics…

Big Ben channeled his inner Vick on Sunday with a career fantasy performance. He feasted on a Raider secondary missing Pro Bowl CB Nnamdi Asomugha, and connected with eight different wideouts, although his signature play of the day came on a second-quarter 16-yard touchdown scramble that would put the game away at 14-3. With monster performances the last two weeks, Roethlisberger has richly rewarded patient owners who stuck with him through his suspension.

“It’s funny, because if you ask me I felt like we didn’t have a good offensive performance. I felt that we were ok. I told the guys that at the very end. It’s a good job of bouncing back and playing well, but we left a lot out there. It wasn’t our best performance by any means. I don’t know how many yards were negated because of penalties, but it had to be a lot. That’s just not us, we killed ourselves today. We were good enough in all phases to still win.” — Ben, during his post-game press conference. 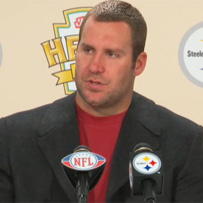 The Raiders’ Richard Seymour was ejected late in the second quarter after sending Ben to the ground with a shove to the face. The incident occurred after Ben threw a 22-yard touchdown pass to Emmanuel Sanders to give the Steelers a 21-3 lead.

When asked after the game what he said to Seymour, Ben said, “I just said let’s get ready for the extra-point.

“Yeah, it blew my mind. We knew coming in that it was going to be a pretty physical game. There was a lot of pushing and shoving and extracurricular stuff. I was a physical natured game. I just remember trying to get between guys, let’s move on, we scored, let’s go.”

Seymour told reporters after the game, “I apologize to my teammates. I never want to do anything to hurt the team. You always want to protect yourself, but there’s no excuse…I’m not sure why he ran up on me. I just turned around and it was a natural reaction.”

Seymour said he doesn’t remember Ben saying anything to him.


If you missed Ben’s post-game interview on television….

You can see a portion of it on video here.

You can also read his comments at Steelers.com here.

You can check out video highlights from the game here.