“For me, it’s about getting some good work in this week. I don’t think I’m going to play (Thursday night against the Panthers). I haven’t played in the last few ‘last’ preseason games, so I don’t plan on playing. I’ll get some work in this week at practice just working on some things we haven’t had a chance to touch on yet this preseason.” — Ben 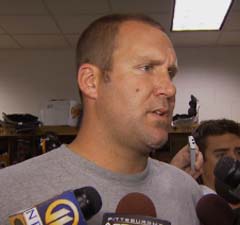 Even though the preseason finale is Thursday, Ben Roethlisberger has turned his attention to Cleveland

Ben Roethlisberger has an agenda this week that has little to do with Carolina and the Steelers’ upcoming preseason finale.

“Start watching Browns stuff,” Roethlisberger revealed regarding one of the top items on his current to-do list.

The Browns will be at Heinz Field to open the regular season on Sept. 7.

There’s still some preseason business with which to attend before then, but none that figures to get in the way of Roethlisberger’s ratcheted-up levels of regular-season anticipation and regular-season preparation.

Such an approach has become somewhat standard for Roethlisberger and quarterbacks coach Randy Fichtner in recent preseasons. It reminds Roethlisberger that the regular season is right around the corner.

“Usually, Randy and I will start looking at the first (regular-season) opponent during this (preseason) week,” Roethlisberger said. “I was still up there in the meetings for the Carolina stuff. I do the Browns stuff during down time, during breaks and things like that. Or, once he lets the other quarterbacks come get ready for walk-through I kind of stay up there for an extra 15, 20 minutes and watch.


You can read more from Ben’s interview here and watch the video here.