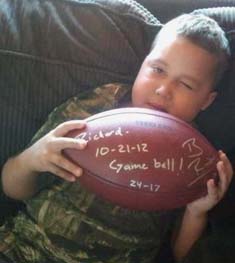 Dozens if not hundreds of people arrived at Lexington Town Hall on Monday night sharing smiles and tears as they remembered 9-year-old Richard Culliver.

There, every person had a story to tell or a memory to share about Richard.

“Richard has a fan base like no other,” Jada Collins said. “Bigger than Justin Bieber’s.”

Culliver was considered the “class jokester” of Michelle Webster’s second grade class at Lexington Elementary. Although he was known for making his classmates laugh, Webster will remember Culliver for more than that.

“Being a teacher is about teaching the whole child in their academics but also helping them grow socially,” Webster said, “and he just taught me patience and just to make every day special.”

Culliver touched the lives of many including Pittsburgh Steelers quarterback Ben Roethlisberger who recorded a video for Culliver before he passed away.

Earlier this month, Culliver’s mother said doctors found another tumor. On Sunday morning, his mother shared the sad news of her son’s passing on Facebook.

Richard had quite a following of fans right here! He was featured several times, and even received a game ball from one of his favorite players (photo above). He was also our special Warrior for a Warrior Wednesday post last year.


“Mommy, I’m gonna cry. I’m famous! Do I need a Twitter account now?”– Richard Culliver to his mom Stephanie, after seeing his first Shout Out on the website in October, 2012.

He was always a big hit with his Steeler Nation family and received many prayers! Richard, we will miss you!! Rest in Peace.