“To be the first one outside of law enforcement to win this award, it’s an awesome honor. The award means a lot to my foundation.” — Ben 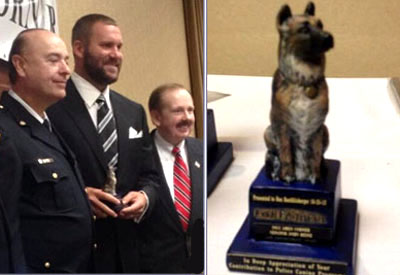 Roethlisberger became the first non-law enforcement individual to be honored by the Amen Corner, receiving the award for his contribution to K-9 units of police and fire departments in the Pittsburgh area and throughout the country through his foundation.

The luncheon annually honors a select group of police officers for their heroic actions, with 10 officers from the Western Pennsylvania area honored this year. Each of the law enforcement officers will receive a statuette, modeled after the Law Enforcement Officers Memorial near Heinz Field.


Congratulations on this honor, Ben! It is well deserved. Zeus is wagging his tail from Heaven!


You can read about the Heroes that were honored yesterday here.


*Thank you to Mr. Stokey, WTAE news anchor & sports director, for the photos!


“He is the best. There was never a doubt that he was going to come back. I know Heath, I know him too well. He works so hard and his passion for the game to come back is like nobody else I have seen. I have always said he is the best tight end in the game and he is one of the best, if not the best teammate I have ever played with in my entire life in all sports. I love him to death and am so proud of him that he won the award.” — Ben, from Steelers.com

The award is presented annually to a Steelers player who has fought back from an injury or tough circumstances to return to the field. He will receive the award on November 5th at the 21st Annual Arthur J. Rooney, Sr. Courage House Luncheon which is held at Heinz Field.


You can read more & get ticket information for the luncheon here.

You can check out more on Heath here!