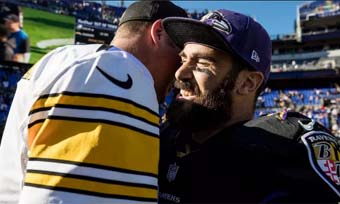 Baltimore Ravens safety Eric Weddle always texts back and forth, “Good luck and be safe,” with a certain friend before every game.

On Sunday, Weddle will then see that buddy across the line of scrimmage in what will be one of the most fierce games of the season.

Weddle and Pittsburgh Steelers quarterback Ben Roethlisberger have what they describe as a “genuine” friendship that dates to the 2011 Pro Bowl. They hit it off, talking about golf, fishing and family.

Roethlisberger is known to keep a tight circle, but Weddle is inside it.

“I value him as a real friend,” the quarterback said.

It has reached the point where Weddle and Roethlisberger will talk at least once a week throughout the season, even during the days leading up to the biggest rivalry in the NFL.

From the rigors of pro football to their love for hunting, the conversations have more range than Weddle in the open field.

“He’s just a good dude,” Weddle said. “I cherish relationships in this league.”

The two kept in touch sporadically at first, but the relationship mushroomed thanks to Roethlisberger’s yearly trips to California to see his agent, Ryan Tollner, and his sister, Carlee. Weddle was nearby as a San Diego Chargers safety from 2007 to 2015, so the two decided to meet for golf outings or family dinners.


“We always talk crap whenever we are around each other. He’s got kids, I have kids. It was just nice when it all started. When you text someone around the league, a lot of guys don’t text you back. But it was nice that he always texted or called me back. That meant a lot to me because he got stiffed by guys who big-time you.” — Eric Weddle.

Roethlisberger did more than text back when Weddle was a free agent in 2016. He walked into the Steelers’ front office and told coach Mike Tomlin and general manager Kevin Colbert that they should sign Weddle.

Roethlisberger’s conviction came from Weddle’s ability as a “phenomenal football player,” he said.

“I pushed hard for him to come here,” Roethlisberger said.

Weddle ended up signing a four-year, $26 million deal with Baltimore.

“He knew everything was going down. He was just like, ‘I’m going to try to get you here,'” Weddle said. “He tried to pull some strings to get me there. We talked a lot that offseason.”

Weddle’s presence doesn’t exactly help Roethlisberger beat a rival, but he savors the moments to compete against him. Ravens-Steelers games are filled with what Roethlisberger calls “friendly banter” between the two.

Midgame, Weddle knows he might hear “stop showing and stop blitzing” from Roethlisberger at the line of scrimmage if he catches Weddle in a disguise.

No game strategy shared, just a “good luck,” and a “see ya for the postgame hug.”

“It’s nice to have a genuine good friend to talk ball,” Weddle said.