“Any AFC North football game is awesome. We came here, their place, hostile environment. A lot of respect for these fans. This is one of the loudest places I have ever played. We came out and we executed. That drive at the start of the second half was huge. A lot of third down conversions against the number one defense in the world. It feels pretty good.” — Ben.

Recap brought to you by Teresa Varley at Steelers.com: 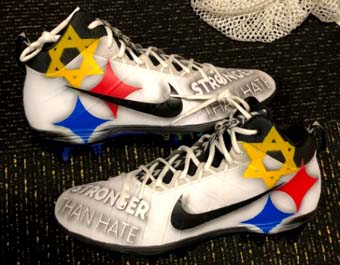 The Steelers remain in first place in the AFC North after defeating the Baltimore Ravens, 23-16, in another hard-fought battle between the teams in the series.

The win is the Steelers third consecutive AFC North victory, improving their record to 5-2-1 on the season.

The win didn’t come without a nerve-racking moment when Ben Roethlisberger was tackled by Za’Darius Smith after a scramble and laid on the field for an extended period of time. Roethlisberger missed only one play, though, quickly coming back after it was just the wind getting knocked out of him.

“I am doing all right. I thought I was dead for a second,” said Roethlisberger. “Luckily it was just the wind. That is a big guy landing on you. I had to take a quick breather. I am all right. I feel like a typical Steelers-Ravens postgame, just glad we got the win.

When Roethlisberger went out, Joshua Dobbs came in for one play. And it was a huge one. The Steelers were facing a second-and-20 from the five-yard line and Dobbs’ first pass of the season was a 22-yard strike to Smith-Schuster to move the chains.

Roethlisberger completed 28 of 47 passes for 270 yards and two touchdowns, while James Conner had his fourth straight 100-yard gain, carrying the ball 24 times for 107 yards. He also had seven receptions for 56 yards and a touchdown.

The defense was stingy again, allowing just 61 yards rushing and 209 yards in the air, while sacking Joe Flacco twice.

You can watch teh video from Ben’s post-game interview here.

And for your viewing pleasure…video highlights of today’s game.

Photo: Ben wanted to share a picture of the cleats he wore in today’s game.