Home/News/Ben stops by the ATA Trade Show
Previous Next

The ATA (Archery Trade Association) held their show in Columbus, Ohio this week and had a visit from #7 today: 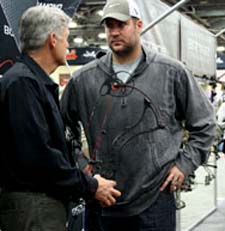 Pittsburgh Steelers quarterback Ben Roethlisberger stopped by the ATA Trade Show Thursday afternoon to check out what was new from archery and bowhunting manufacturers.

He also paused often for pictures with Show attendees and signed autographs.

Roethlisberger, an avid bowhunter, said he’s able to make some rounds on the Show floor in-between photos and autograph signings. “There’s way too much to miss so, yeh, I do get around a little so I can see what’s new at this Show.”

There’s also the conundrum that is two conflicting seasons: the heart of bow season overlaps the heart of football season.

“Hunting is relaxing so it works that it’s during the football season,” Roethlisberger said. “I use bowhunting to unwind on my days off. With bowhunting, I can clear my head.”


Ben also stopped to pose for a photo with the “Gorilla Girls” from the Gorilla Tree Stands company.


You can see the photo on their Facebook page.