Home/News/Ben talks fatherhood, football, and his future
Previous Next

“I just want to be like my dad, so I’ve had 30 years of being around, to me, the best role model there is when it comes to being a father. I don’t know if a 20-minute sit-down really can do anymore for me than what 30 years of experience has brought to me.”  — Ben on being a father, from his interview with Sally Wiggin that aired this evening. 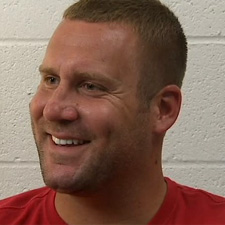 It’s been a milestone year for Steelers quarterback Ben Roethlisberger.

He got married last July, celebrated his 30th birthday in March, graduated college in May and announced in June of this year that he and his wife, Ashley, are expecting their first child — a baby boy — later this year.

Channel 4 Action News anchor Sally Wiggin sat down with the two-time Super Bowl-winning quarterback at Saint Vincent College in Latrobe, where he’s preparing for the upcoming season, as well as being a first-time dad.

“Brett Keisel and I sat up here the other night for probably about an hour and just sat outside talking about kids and what it was like, so it’s neat to get experience, to talk to people who have experience like that,” said Roethlisberger.

With concussions looming over the NFL, Roethlisberger said he’ll allow his son to play football, but there will be some restrictions.


You can read more from the 6:00 PM broadcast of his interview here.

You can watch more of his interview with Sally Wiggin during the 11:00 PM news broadcast.

Video of his full interview will be posted if and when it becomes available!