Ben: “The quarterback needs to play better, and he will.”

Home/News/Ben: “The quarterback needs to play better, and he will.”
Previous Next

Ben: “The quarterback needs to play better, and he will.”

The Steelers fell to the Bengals 20-10 last night.


“Not a lot of positives right now, and that’s a negative. If anything, it’s going to be how upset guys are, myself included, that this is happening to us. We need for older guys to step up, younger guys to get going so we can avoid the road we’re going down.” — Ben, when asked if there were any positive to take from last night’s game. 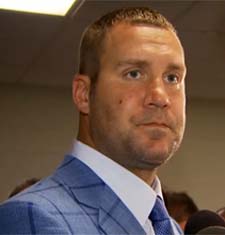 What happened on the play where David Paulson lost the fumble?

“It’s hard because we don’t know if it’s a fumble. You see the crowd start going crazy and their sideline start reacting like they’re going to challenge it, so at that moment you start thinking, “OK, we’ve got to hurry up and call one of the hurry up plays.” So that’s what we were trying to do, and Coach Lewis threw flag.”


It seems like every time you get something going, there’s a penalty or something happens. Is that making the offense worse than you think it actually is?

“It’s frustrating. We had some big plays called back because of penalties, and just give them credit. They threw a lot of different looks at us and we didn’t — I didn’t— make enough plays to get it done tonight.”


How much of a momentum killer was the tripping call on Marcus [Gilbert]?

“Very. That’s a big play. I’m not sure where he got tackled, but I think it’s on the other side of the 50 and we’ve got all the momentum in the world going there and next thing you know, you’re backed up. I just — looking up at the JumboTron — I quickly got to see it.”


On the drive at the end of the first half, that was the best drive that you had. Were you calling the plays there?

“Yeah. We were in like a two-minute mode, so I was calling all the plays there to try and get down the field, and all the guys did a good job of getting into windows and making plays after the catch.”


Is something off with the offense, like the timing?

“If you asked me right now, my knee-jerk reaction is giving them credit for making it difficult for us. I’d have to watch it on film to see why we were off on some of our things. I know there were a couple times receivers who said they couldn’t see the ball in the air with the light. Those are kind of fluke-y things that can happen.”


Being 0-2 is an unusual situation for you — how frustrating is it?

“Very frustrating. We’ve got a long way to go. We’re going to let this sink in for a day or two and then get ready for Chicago.”


Are you lobbying to go to the no-huddle more? Is that something you’ve talked about with Todd Haley?

“We talk about it. Coach Tomlin, Coach Haley, Coach Randy Fichtner, we all communicate and we all talk about it, and if we think it’s in the best interest of the offense, we’ll get into it.”


Is this offense in trouble?

“Don’t think so. Nope. But the quarterback’s got to play better, and he will.”

Fan Jenn Pratt wanted to share this stat and link this morning with Steeler Nation:

“Over the last 25 years, the Steelers have started 0-2 four times. They finished with a winning record in each of the four seasons, making the playoffs three times.”


*Thank you to both Jenn and Trish!

Point the thumb: Ben Roethlisberger delivered a pointed message in the visitors locker room at Paul Brown Stadium following the Steelers’ second loss of the season. “Ben said it real good,” right guard David DeCastro said. “Don’t point the finger; point the thumb.” Roethlisberger did just that after the Steelers’ locker room was opened to reporters. “I didn’t make enough plays,” he said.