The Ben Roethlisberger Show: Everyone Needs To Rediscover The Steeler Way

Home/News/The Ben Roethlisberger Show: Everyone Needs To Rediscover The Steeler Way
Previous Next

The Ben Roethlisberger Show: Everyone Needs To Rediscover The Steeler Way

From Ben’s segment on 93.7 The Fan this morning during the Vinnie & Cook Show: 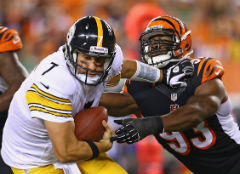 Hours after a tough loss at Cincinnati, Pittsburgh Steelers quarterback Ben Roethlisberger joins Vinnie & Cook for his weekly appearance on Sportsradio 93.7 The Fan.

Roethlisberger says the Steelers’ 0-2 start is “uncharted territory,” and reveals that he is calling a meeting with the other veteran players.

“We’re going to sit down and talk and figure out a way to right the ship and make sure that these young guys know that this is unacceptable,” he says. “And it starts with all of us older guys. Maybe us older guys need to revisit it ourselves, because we need to find a better way of letting these guys know what it means to be a Pittsburgh Steeler.”

“Maybe that means bringing in the Lombardi [trophies] and setting them in the team meeting room and putting up the Hall of Fame pictures and all that stuff.”

Ben also reveals the physical toll the loss to Cincinnati took on his body.

Ben offers his theories on the team’s offensive woes, gives kudos to new center Fernando Velasco, and explains why balance is the key when it comes to a sound offensive scheme.


You can listen to the podcast here!