Ben there, done that…

Home/News/Ben there, done that…
Previous Next

Ben there, done that…

“I think teams think we might as well try, if that kid can do it, why not give it a shot. The tough part is, if a quarterback has success early, people are quick to say how good you can be. It happened with me, too.” — Ben, talking about his early success.

The Pittsburgh Post-Gazette‘s Gerry Dulac this morning, from his column “Roethlisberger may be responsible for rookie QB trend”: 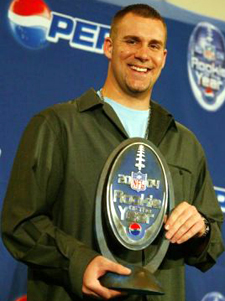 Rookie quarterbacks are being thrown to the NFL wolves these days, rarely getting more than a year to be an understudy and learn the game from the sidelines, the old-school way.

There is only one person to blame:

In 2004, after being selected with the 11th overall pick by the Steelers, Roethlisberger was forced into the starting lineup in Week 3 after an injury to Tommy Maddox in Baltimore. All he did was become the first quarterback in NFL history to go 13-0 in the regular season and lead the Steelers to the AFC championship game.

One year later, he won his first Super Bowl.

Since then, teams have not been afraid to try a rookie at quarterback, never knowing when one might perform like Roethlisberger.


You can read more from Mr. Dulac’s column here.