…released its list of Best Sports Cities earlier this week and it has generated quite a buzz on national sports talk radio. 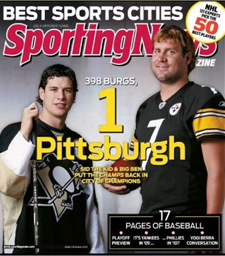 October, 2009: Pittsburgh was selected as the Best Sports City by Sporting News magazine

The list, which ranks cities from 1 to 271, was created by looking at “the 12 months from summer 2010 to summer 2011” and was “based on point values assigned to various categories, including but not limited to, won-lost records, postseason appearances, applicable power ratings, number of teams and attendance.”

Dallas-Fort Worth got the nod at No. 1 this year.

As for the AFC North rival cities? Cincinnati was No. 21, Baltimore was listed at No. 29, and Cleveland was farther down at No. 45.

Do you agree or disagree? And who would make your Top 10?