Home/News/Ben: “This is a big win for us”
Previous Next 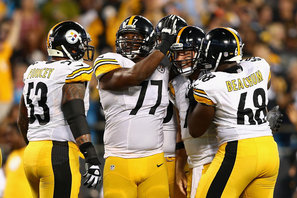 It was a game the Steelers celebrated the return of some old, old friends.

Their eight-quarter drought of touchdowns ended in a rainstorm of four in the second half. They forced their first two turnovers this season. And they produced two 100-yard rushers in one game for the first time in 28 years.

It all added up to a runaway 37-19 victory against the favored Carolina Panthers Sunday night at Bank of America Stadium that left them with a 2-1 record.

“This is a big win for us,” said quarterback Ben Roethlisberger, who threw two 7-yard touchdown passes to Antonio Brown, was sacked just once and ran the no-huddle offense as well as they draw it up, mixing the run and the pass. He completed 22 of 30 passes for 196 yards with no interceptions and was sacked just once.

“This is a good Steelers football game — physical, offense, defense and special teams.”

It was a costly victory, though, as they lost three defensive starters — Ike Taylor to a broken right forearm and linebackers Jarvis Jones (right wrist) and Ryan Shazier (right knee). Coach Mike Tomlin referred to the injuries as “significant.”

Le’Veon Bell rushed for 147 yards and LeGarrette Blount added 118 and a touchdown as the Steelers rampaged over Carolina’s defense for 264 yards rushing and 454 total.

Bell ripped off an 81-yard run and said the “hole was probably the biggest hole I had in my whole career.”

“That’s awesome,” Roethlisberger said of the twin 100-yard rushers, not seen in black and gold since 1986 when Walter Abercrombie and Earnest Jackson did it. “I’m sure Steelers fans back home are going crazy.”

Roethlisberger said they knew Carolina would try to take away the deep pass and praised an offensive line that blew the Panthers off the ball and protected him when he dropped back to pass.

“It shows what we can do … We knew running the ball was going to be critical,” Roethlisberger said.

You can watch the video of Ben’s post-game interview here.

And you can check out some game photos here.