Ben: ‘To see the joy is special’

Home/News/Ben: ‘To see the joy is special’
Previous Next

Ben: ‘To see the joy is special’

The Steelers made a wish come true for a special fan from Texas.

As a wide-eyed James Davila watched Ben Roethlisberger emerge from the Steelers locker room area his smile was wider than the entire state of Texas, a place the 15-year old calls home.

Davila stared silently as Roethlisberger jokingly walked past him and spoke with his younger brother, then his sister and parents, and then, in a playful way Roethlisberger walked over to the Make-A-Wish recipient and asked him, and who are you.

Davila couldn’t stop smiling, couldn’t even speak he was so overcome with excitement. He let out an excited laugh, but that was about all the tongue-tied teen could muster. And how could you blame him, his wish was coming true.

And it got even better when Roethlisberger handed him the cleats he wore in Monday night’s win over the Houston Texans at Heinz Field and then autographed them for him. 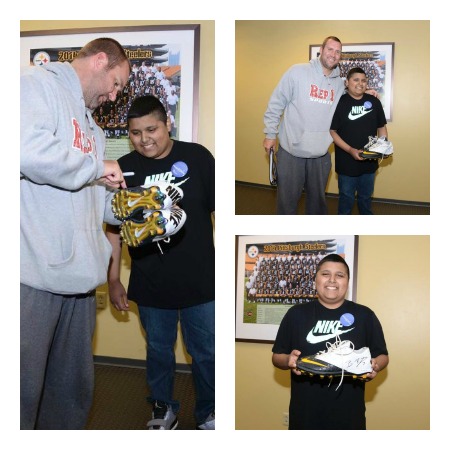 “It’s so much fun,” said Roethlisberger. “To be able to have someone where you can see the joy and their face light up is special. To give him that surprise and hand him my cleats was really fun.”

Davila, who recently completed treatment for sarcoma of the liver that required a transplant, had been waiting a year for this wish to come true – to meet Roethlisberger and Troy Polamalu, as well as the rest of the Steelers. And through the relationship between the Steelers and the Make-A-Wish of Western Pennsylvania, it was worth the wait.

“When I first started liking the team I was a lot younger and liked the black and gold,” said Davila. “Then I watched them a lot on television, seeing how they played and I really liked the way they played. I really like Ben and Troy.”

Davila and his family attended practice on Friday, meeting Polamalu, Coach Mike Tomlin and Art Rooney II, as well as the rest of the players, and will be at Sunday’s game against the Indianapolis Colts at Heinz Field.

“This has been so exciting. I used to play football, and I like watching it. I can’t play football anymore, so seeing professional football players, what I wanted to do some day, is really exciting. Seeing them in person and not on the screen … wow.”


You can see more great photos of James, with players like Troy, Brett, Heath and Ike right here.


*A BIG Thank You to Ms. Varley & of course, the Steelers!