“We do whatever it takes around here!” — Ben.

From Joe Starkey, at the Pittsburgh Tribune-Review: 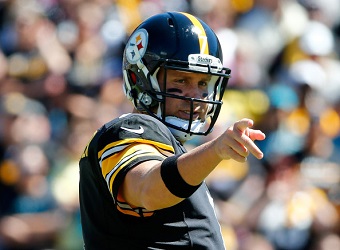 Mike Tomlin calls his quarterback “a sick competitor.” The description seemed especially apt Monday night at Heinz Field, where Ben Roethlisberger pretty much lost his mind in the pursuit of victory.

Roethlisberger turns 33 in March. He does not have the security of a new contract. His body has absorbed untold punishment in the form of 406 sacks and countless hits.

Yet there he was in the second quarter, diving head-first into the shins of Houston linebacker Whitney Mercilus in hopes of giving Antonio Brown an extra second to throw. The result was a Brown-to-Lance Moore touchdown that went a long way toward the 99th victory of Roethlisberger’s career.

One question, Ben: Why did you do that?

“It’s my job to secure the edge, and he came upfield pretty quick. So I had to make sure I slowed him down.”

So yes, “sick competitor” fits. “Prolific winner” does, too, even after back-to-back 8-8 seasons (Roethlisberger has never had a losing one).

If the Steelers beat the Indianapolis Colts on Sunday, Roethlisberger will improve his record to 100-50 and reach 100 wins faster than all but three quarterbacks in NFL history. And those three quarterbacks (Tom Brady, Joe Montana, Terry Bradshaw) own 11 Super Bowl rings combined.

This isn’t some statistician’s phony milestone. It’s not consecutive games with 15 completions for 150 yards. This is 100 wins.

This is big, even if Roethlisberger downplayed it Wednesday.


You can read more here, including “seven snapshots culled from those 99 wins”.

“He’s got it all. His anticipation, his vision, his awareness, especially when things are breaking down and [he is] finding guys and dumping the ball off and getting to his check-downs. He’s playing really good football.” — Colts coach Chuck Pagano on Ben.

And from Ed Bouchette, at the Pittsburgh Post-Gazette: 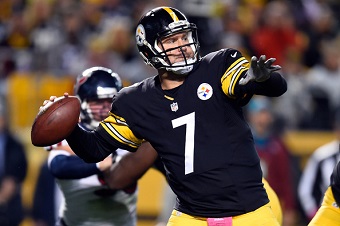 Only three quarterbacks in the history of the NFL won their 100th game by their 150th start. Two are in the Pro Football Hall of Fame, the other is headed there.

They are Terry Bradshaw, Joe Montana and Tom Brady.

Ben Roethlisberger can become the fourth. All he and the Steelers must do is beat the Indianapolis Colts Sunday at Heinz Field. It will be his only chance to match the other three because that will be Roethlisberger’s 150th regular-season start.

“I guess if you play long enough, you’re going to get those milestones,” was Roethlisberger’s reaction.

Well, no, not this one. Plenty of quarterbacks played many years without achieving 100 wins, never mind in their first 150 games. Roethlisberger always maintained that his most important statistic is wins and this would put him in rare company, not to mention two of the other three having strong Pittsburgh connections. Bradshaw and Montana each won four Super Bowls, Brady has three, Roethlisberger two.

With Roethlisberger playing, the Steelers went 6-2 in those games, including both in the postseason.

“I’ve gone against him obviously numerous times, some good and a lot of bad,” Pagano said.

Pagano detailed why it was so difficult preparing to play Roethlisberger.

“He’s big, he’s strong, he’s accurate, he’s got great, great vision, strength. You can’t get him down in the pocket. The way he’s able to throw on time, throw on rhythm, throw the deep ball and the way he can extend plays and escape and brush off would-be blitzers and things like that and find guys, it’s amazing.

“He’s completing 66, 67 percent of his passes. He’s only thrown three interceptions. He’s managing the game extremely well. He’s getting the ball in the hands of his playmakers. From a physical standpoint it looks like he’s in great shape. The movement, the mobility is still there. The arm talent has not diminished; he still throws one of the nicest balls in the entire National Football League — deep balls, check-downs, crossers, it doesn’t matter.”