Home/News/Ben: “We just move on”
Previous Next

“I was talking to coach LeBeau and we used our mulligan on the first tee, we take our penalty stroke and we’ve got 17 more holes to birdie.” — Ben on last Sunday’s loss.

Ben spoke to the media today after practice. Some of the highlights: 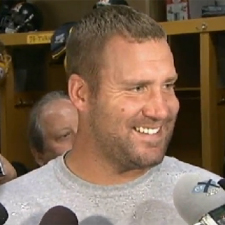 “We didn’t play well. I particularly didn’t play well at all. Of course it’s frustrating because, especially the week leading up to the game I felt better than I ever felt, and I felt good out there – felt real comfortable.

“I think we’re all entitled to a bad day now and then. We just move on. That’s why I say it’s in the rear view mirror and we move on and get ready for this [week’s] game.”

Seattle Seahawks head coach Pete Carroll also spoke to the media today and had this to say about Ben: 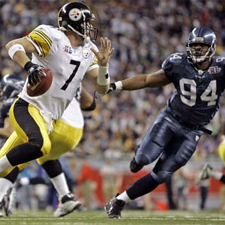 “He’s such a big, strong guy that he can just shed the rush. You have to really work to get him down. And he does not give up on a play. He won’t throw the ball away. He won’t waste a play – he’s going to go find something to do with it, because he’s been so good at it.

“And so, boy, there’s a big play just waiting to happen with him. He’s a very, very volatile football player that we have to a great job with in coverage, we have to stay on top. And then we have to stay alive on our rushes so we can get to him and hopefully keep him from making those types of plays.”


You can read more from Coach Carroll here.

Ben played a competitive game of mini-golf at Wildwood Highlands with WDVE‘s Jim Krenn and Eric, an “alumni” of Children’s Hospital Pittsburgh.

You can watch video of the action here.