Home/News/Ron Cook: Don’t write off season just yet
Previous Next

From Mr. Cook’s column at the Pittsburgh Post-Gazette today: 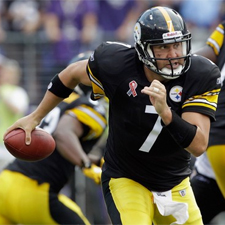 Steelers quarterback Ben Roethlisberger had a brief chat with linebacker James Farrior near the end of their 35-7 smackdown Sunday by the Baltimore Ravens. It was a man-to-man talk. It was a captain-to-captain talk. And it wasn’t anything like you might imagine.

“There’s not much we can do about this game. Let’s just make sure we stay together and keep fighting as an offense and a defense. Let’s don’t let anything come between us. I know we won’t.”

I know what a leader Roethlisberger has become. He played a miserable game Sunday against a team he had owned and had beaten seven consecutive times. But his body language never betrayed him. He knew he couldn’t afford to sulk. He knew teammates were watching him.

Presumably, Farrior said the same thing to his defense. I know what a leader he is, as well.

Most of all, I know what a leader coach Mike Tomlin is.

Is it really that much of a stretch to think Tomlin will bring the Steelers back again?


You can read more of his column here.

Over 500 passing yards in a game? Ben there, done that! 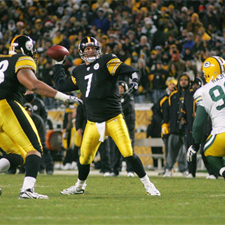 Last night, the Patriots’ Tom Brady became just the 11th quarterback in the 92 year history of the NFL to pass for more than 500 yards in a single game as his team won 34- 24 against the Dolphins in Miami.

It’s a club that also includes Big Ben. He is also just the third player to throw for 500 yards and 3 TDs without an interception:


On December 20th, 2009 in a win against the Green Bay Packers, Ben not only lead the Steelers on a game-winning drive, capped by a 19-yard pass to Mike Wallace as time expired for the 37-36 win, he became just the 10th quarterback since 1950 to throw for 500 or more yards in a game.

He completed 29 of 46 passes for 503 yards and three touchdowns, with no interceptions.


From Ron Cook’s column the day after:

“In the 90-year history of the NFL, only nine quarterbacks have passed for more yards in one game than the 503 that the Steelers’ Ben Roethlisberger hung on the Green Bay Packers yesterday. Two were journeymen — Vince Ferragamo and Elvis Grbac. Three were or are very good players — Boomer Esiason, Phil Simms and Drew Brees. Four were absolute legends — Norm Van Brocklin, Warren Moon, Dan Marino and Y.A. Tittle.

“I’m thinking Roethlisberger will be among the legends before he is done.

“We’re so lucky here. Each week, we get to watch one of the game’s all-time greats. Each week, we know the Steelers are never out of a game because of him.”


Mr. Cook’s column from that game is still available for reading here.