Ben: ‘We play for the fans’

Home/News/Ben: ‘We play for the fans’
Previous Next

Ben: ‘We play for the fans’

Steelers to say ‘Thank You Fans’ on Sunday with prizes and giveaways before and during the game. Arrive early and be ready for the huge AFC North showdown.


“We enjoy calling Heinz Field home. We have the best fans in all of football. We love it when they get loud, and rowdy and make it hard on the other team. We look forward to having another one of those type of games this week.” — Ben. 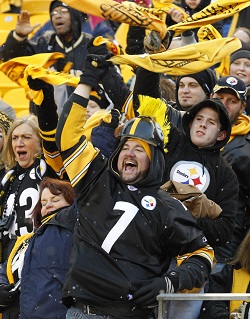 The AFC North title will be on the line Sunday night when the Steelers host the Cincinnati Bengals at Heinz Field, and the atmosphere will be electric.

Steelers’ fans are encouraged to arrive early for the 8:30 p.m. kickoff, and wave their Terrible Towels at kickoff when a nationwide audience will be watching, showing the world why Steelers fans are the best.

The support of Steelers’ fans all throughout the year is a huge boost to the players and coaches, and on Sunday night the organization is showing their appreciation for fans as it’s the ‘Thank You Fans’ game.

The first 5,000 fans to arrive will receive a Steelers Nation Unite Terrible Towel, and all 65,000 in attendance will receive a special ‘Thank You Fans’ scratch off ticket where they can win a variety of prizes.

In addition, throughout the game fans will be selected to win prizes that range from in-stadium food and beverage to Heinz Field concert tickets and one lucky winner will take home a 55” inch flat screen television.

So, arrive early and be ready to cheer on the Steelers as they battle for the AFC North title.