Congratulations to the Steelers Pro Bowlers!

Home/News/Congratulations to the Steelers Pro Bowlers!
Previous Next

Congratulations to the Steelers Pro Bowlers!

Five Steelers Selected to the 2015 Pro Bowl Squad, including #7!


From Steelers.com this evening: 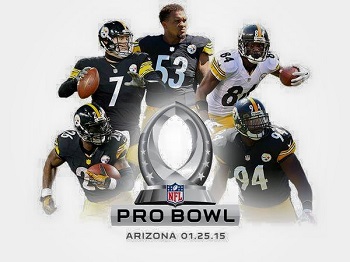 Steelers running back Le’Veon Bell, wide receiver Antonio Brown, center Maurkice Pouncey, quarterback Ben Roethlisberger, linebacker Lawrence Timmons have been selected to the 2015 Pro Bowl team, announced tonight by the NFL. The Steelers are sending multiple players to the Pro Bowl for the 14th straight season and for the 23rd time in the last 26 seasons.

The Pro Bowl will be played Sunday, January 25, 2015, at University of Phoenix Stadium in Phoenix, Arizona, and will be televised live on ESPN at 8 p.m. (ET). For the second time ever, the Pro Bowl is “unconferenced,” so players were selected without regard to conference by a combined voting of fans, players and coaches.

Roethlisberger has been selected to the Pro Bowl for the third time in his NFL career (2008, ’12, ’15). He has established Steelers single-season franchise records for completions (384) and passing yards (4,635) in 2014, while adding 30 passing touchdowns and a 103.8 passer rating. Roethlisberger has registered a 100.0 or better passer rating in 10-of-15 games in 2014 – a franchise record – and tied for the NFL lead – along with eight 300-yard games. In Week 8, Roethlisberger threw for a single-game franchise record of 522 yards – tying as the fourth-most in NFL history. He set an NFL record for the most passing touchdowns (12) in back-to-back games (Weeks 8-9).


You can read about the other selectees here.