Home/News/Ben: FedEx NFL Air Player of the Week
Previous Next 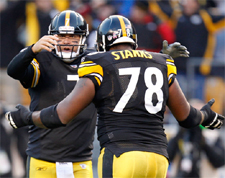 Ben completed 36 of 50 passes for 365 yards, two touchdowns and one interception in the Steelers’ 25-17 win over the New England Patriots. His total passing yards were the most of any quarterback on the weekend.

LeSean McCoy rushed for 185 yards and two touchdowns on 30 carries in the Eagles’ 34-7 win over the Dallas Cowboys. His ground yardage total was the highest of any player on the weekend.


You can check out NFL.com for all the FedEx Players of the Week so far.