A sample of post-game thoughts from around the web – 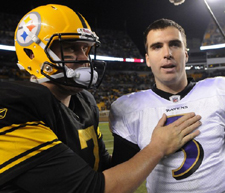 Unlike six other times this year when the Steelers fought off injuries and won, that wasn’t the case Sunday night.

Roethlisberger, who was 7-1 against the Ravens at Heinz Field, appeared to have rallied the Steelers when he threw a 25-yard TD pass to wide receiver Mike Wallace with 4:59 left to play. That gave the Steelers a 20-16 lead, a lead the defense failed to protect.

On this night, the Steelers (6-3) just couldn’t win as they’ve done so often when hit by injuries.

The Steelers did get back linebacker James Harrison, who was playing for the first time since fracturing his right eye orbital in an Oct. 2 loss in Houston. Against the Ravens, Harrison recorded three sacks, including one in the fourth quarter that appeared to turn the game around.

But this game wasn’t over.

Later in the fourth quarter, with just 2:24 on the clock, Flacco drove the Ravens 92 yards for the victory.

“Every loss stinks to me.” — Ben, when asked if this loss was  more “gut-wrenching” than others. 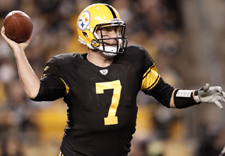 Ben Roethlisberger looked like he had the Pittsburgh Steelers on their way to a win on Sunday Night against the Baltimore Ravens. Unfortunately Joe Flacco led a late comeback, leaving Roethlisberger’s statistics relevant in the winning department only for his fantasy owners.

Roethlisberger completed 20 of his 37 passing attempts for 365 yards and a touchdown while adding an additional 61 yards by way of three scrambles out of the pocket.

Ben Roethlisberger, statistically speaking, has been having the best season of his career so far in 2011. He’d been averaging a shade under 300 yards per game, along with 18 touchdowns, heading into Sunday night’s affair.

In Week 9, Roethlisberger faced the only team that’s been able to shut him down, the Baltimore Ravens and their 3rd-ranked pass defense. They certainly didn’t shut him down, but at least they held him out of the win column.

“He won the game. He’s a good player, and he stepped up when needed.” – Ben, on the final drive of Ravens quarterback Joe Flacco.

– Ben’s 366-yard performance made him the first quarterback in Steelers’ history to go over 300-yards in three straight games. It was his fourth 300-yard passing performance of the season and the 19th of his career.


You can listen to Coach Tomlin’s post-game press conference here.

You can see a few game photos here and here.