Ben: We’ll come back stronger than ever”

Home/News/Ben: We’ll come back stronger than ever”
Previous Next

Ben: We’ll come back stronger than ever”

“I need to play a lot better. It’s the first one, first game of the year. I grabbed our offense at the end and just talked to them and said, ‘the season’s not won or lost today, the division’s not won or lost. We just dug ourselves a little hole. We’ll be all right. We’ll learn and will come back stronger than ever.'” — Ben, after the game. 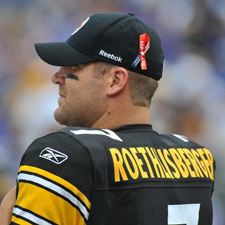 “It hurts so much to lose but you can’t quit, you can’t give up. That’s probably what I’m most proud of, the offense, the defense – never quitting.  Even to the last couple plays we’re out there trying to score. They didn’t give up.

“It was just one of those days. But this was good for us. We just have to watch the film, and get those mistakes corrected. I told the guys on the sideline you can’t quit. You can’t give up.  and I was proud that everybody kept going.

“I guess they were waiting for this one. It’s not the way you want to start it for us, obviously.

On how he “felt” out there:

“This might sound crazy,  but I felt more comfortable identifying, seeing what was going on out there probably than ever when we’ve played these guys.  Saw the coverages, saw the blitzes, and just felt like maybe I was off today. I’m not sure, I need to go back and look at film to give you a better answer. It wasn’t like we were out there and I was confused. I felt good. They just made plays and the ball got away from me…we dug ourselves a little hole but we’ll come back and be ready to play.”

On the play of the Raven’s Terrell Suggs:

“I said it all along, he’s one of the best I’ve played against, and he really got after us today.”


You can see video from some of his post-game interview here (after Coach Tomlin).

Just a few (of many messages) from Steeler Nation, via the site’s Facebook page:

“Don’t see any championship rings being handed out today, it’s a long season to go. Let’s see who wins when it matters most. Keep on slinging Ben.” — Chris Chris

“Even though I’m disappointed with this particular game, I know it will go better next time. Always behind ya Ben and the Steeler Nation!” — Bunne Chaffee Klimek

‘One bad game does not a season make! I would rather get a loss in game one than later. We are solid and we will put it together! Go Steelers!!!” — Joseph Mulinaro

“Ben lead them the way you were taught….this was practice, means nothing, next time we will cheer louder with encouragement as you all run over them for the win. Hang tough, shake it off, learn from it.” — Maria A. Zielinski

“Use this game to fire you all up for the rest of the season. A team does not consist of only 1 player so when you win, and when you lose, it isn’t only because of 1. Steelers Forever!!” — Marilee Perkins

“I still love this big old goof ball, and he’s still one of the great ones. A true fan hangs though the good times and bad, just take it in stride Brother!” — James Anderson


*Thank you so much to Mr. Wexell!