Ben’s chat with the media today

Home/News/Ben’s chat with the media today
Previous Next

Ben’s chat with the media today

From the Baltimore Sun‘s Ravens Insider: 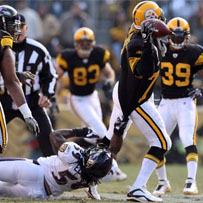 Asked during a conference call with Baltimore media Tuesday afternoon whether he enjoyed lining up against the Ravens, Roethlisberger replied, “As a competitor, yes, you love it, but heck no, I hate playing the Ravens. They’re so good. Defense, every single person and every scheme, everything they do, it just challenges you. As a competitor, you like that challenge and you like the competitiveness, but man, they’re good.”


And about the broken nose…

The last time the Ravens and Pittsburgh Steelers met, the Steelers left M&T Bank Stadium on Dec. 5 with a win and a broken nose for Ben Roethlisberger.

But the Pittsburgh quarterback said he understands that the left-handed blow his face absorbed from defensive tackle Haloti Ngata was inadvertent.

“It wasn’t like I was mad,” Roethlisberger said during a conference call with Baltimore reporters Tuesday afternoon. “No way was it on purpose. So I didn’t feel any kind of way about it.

“I have to apologize to Kelly Gregg,” Roethlisberger said. “I blamed him for it during the game. I’ll have to apologize when I see him on the field. I was giving him a hard time. But any time that these two teams play, the winner walks off feeling pretty good about themselves. I know that because I know some of the guys over there and I know what this rivalry means. So like I said, it’s always a big-time game.”


You can read more on that here.

Kelly Gregg accepts Ben’s apology here (along with a bit of good-natured ribbing).

“I think it was taken out of context, if you ask me,” Roethlisberger said. “I know Coach Harbaugh. He’s a Miami guy and us Miami guys stick together; there’s so few of us. Actually, on the field before every game we talk to each other and ask how everything is going. So I don’t think it was intended maliciously at all.”