“When I grow up, I’m going to be a police K-9 for the Cuyahoga Metropolitan Housing Authority Police Department!” — Chewbacca (photo below). 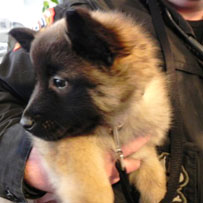 On December 30th, Ben announced the ninth and final grant of the 2010 season outside of the Pittsburgh area. The grant was awarded to the Cuyahoga Metropolitan Housing Authority Police Department (CMHAPD), located in Cleveland, Ohio.

The funds will help fill a void in the department left by the loss of Kubo, CMHA’s three-year old police dog, who died on September 27, 2010 during a training exercise.

Today, we received photos of the two newest members of the department’s K-9 unit, Chewbacca and Loki.

Both puppies were donated to the department by a breeder, and funds from the grant provided by the Ben Roethlisberger Foundation will be used to pay for their training and supplies as they grow up to be serious, hardworking K-9’s.

From an email sent by Brenda L. Malone, Special Projects Coordinator for the CMHA Police Department:

“It is TOTALLY my pleasure to send you the images of what was made possible through the generosity and compassion of others.

The words ‘thank you’ do not seem to be enough to let everyone know of level of happiness, but I hope they are received with all of the heart-felt appreciation that surround the spirit of the Cuyahoga Metropolitan Police Department!”

You can read more about Ben’s Foundation here.


*Thank you to Ms. Malone, Officer John Smiddy, Officer Jeffery Holdeman, and Officer Kerry Blakemore of the Cuyahoga Metropolitan Housing Authority Police Department, as well as Jessica Duffaut, from The Giving Back Fund!