Today, Ben announced the ninth grant of the 2011 season from The Ben Roethlisberger Foundation at The Giving Back Fund. 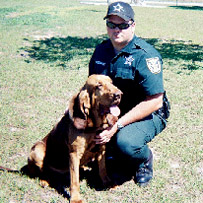 The Foundation will be distributing a grant to the Kody Snodgrass Memorial Foundation in support of the New York State Troopers.

The Kody Snodgrass Memorial Foundation, known as 832 K-9’s Deputy Dogs, will utilize the grant to replace a bloodhound that recently retired early from the New York State Troopers. The new bloodhound will be instituted for search and rescue, criminal tracking, and other scent-specific searches across the Hudson Valley.

“The Kody Snodgrass Memorial Foundation, Inc. is dedicated to providing law enforcement with exceptional bloodhounds trained for police work at little or no charge. The Foundation breeds, raises and trains registered bloodhounds, providing the expert training necessary for these dogs to become valuable partners in the law enforcement community.”

You can read about Officer Snodgrass (above with his partner Jimmy in 2001) who is the inspiration for this mission here.


During the 2011-12 NFL season, The Ben Roethlisberger Foundation distributed grants to K-9 units of police and fire departments in the cities and surrounding communities of each regular season away game for the Steelers. This grant marks the first and only grant of the season gifted outside of the NFL markets in honor of the Steelers’ playoff appearance. The Foundation will also distribute several grants to the Pittsburgh area after the Super Bowl. The Ben Roethlisberger Foundation invited police and fire departments across the country to submit proposals detailing their needs.

This marks the fifth season that the foundation has distributed grants to K-9 units. The Ben Roethlisberger Foundation seeks to support K-9 units of police and fire departments throughout the United States with a particular emphasis on support for service dogs in Pittsburgh, PA.

Congratulations to Ryan Clark who will be joining his teammates Ben, Antonio Brown and James Harrison on the AFC Pro Bowl roster! (Maurkice Pouncey, Mike Wallace, and Troy Polamalu will miss the game due to injury).


Speaking of the Pro Bowl…

– You can watch an interview with Ben from Hawaii on NFL Network on Thursday (January 26th) during NFL Total Access at 7:00 p.m.

– Check out the first article on the Pro Bowl here.

– Keep an eye on the action this week in Hawaii on the NFL.com’s Pro Bowl page.

– Latest photos can be found here and here.