Short excerpts from the second of Ben’s two-part interview with KDKA‘s Bob Pompeani this evening: 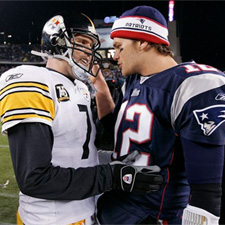 Mr. Pompeani: “This is also the time of the year, Ben, for fantasy football…Quarterbacks – who would you pick?”


Mr. Pompeani: “Would you want to be a No. 1 pick in somebody’s fantasy draft?”

“They’re ridiculous for picking me first because I’m probably not going to put up the numbers others would.”


You can read the rest of Ben’s interview here.

You can watch video of his interviews: Part I and Part II. 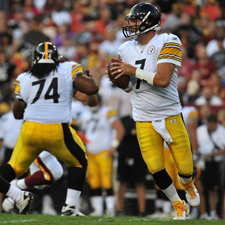 During the Pre-Season Game between the Steelers and the Redskins at FedEx Field, Ben was used sparingly. He played just one series, completing 2 of 3 passes for 22 yards.

As to the injury…

“QB Ben Roethlisberger had to ice his hand and his hip after suffering minor injuries while playing in Pittsburgh’s first offensive series. Roethlisberger  should be fine.” — From CBS Sports.


You can see photos from the game here.


*Thank you to Becky!