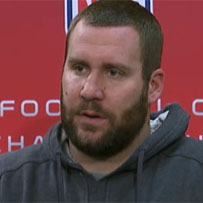 On having Heath Miller in the line-up –

“It’s huge. Heath Miller is one of the best tight ends in the game. I don’t want to take anything away from DJ or Matt Spaeth who played well last time, but Heath Miller is a special player, even when he is not getting the ball, he opens up things for the guys on the outside and he’s a great safety valve for me.”

“There is a lot of confusion. That’s probably one of the things that they pride themselves on. It starts with Coach Ryan. I mean, he is a mastermind at what he does. That’s why it’s extra study, it’s extra walk-throughs, it’s as much as you can do. The Jets defense beat the best two quarterbacks in the game, at their place. I don’t know how I’m going to do it, they’re good!”

“I guess. But those two are also the best IN the pocket at doing what they do. And like I said, to go into their place and beat them at home is something really special.”

“I love him too! (laughter from the media). I have a lot of respect for those guys on defense, every single one of them because they are so good, they really are! All I have to say is they went into Indy and New England and beat the best two quarterbacks in the game, enough said in my opinion.”

“He makes the plays. People get on him a lot, you know it’s, ‘run the plays and manage the game, Mark!’, well no! To be a quarterback at this level and do what he has done you don’t just ‘manage the game’! You play the game and you do it at a high level, and that’s what he’s done! I think every week you see him take strides and get that much better.”

“It’s OK for me, because I know that I’m probably never going to win a league MVP, a passing title. But that’s not why I play the game. I just go out and try win football games, try to win championships.”

“I have nothing but the utmost respect for Bruce, for the play-calling, for him as a person…he is a mentor to me, a fatherly figure. He gets way, way too much blame and criticism and he just kind of laughs about it. It’s unfortunate because he is so good. If you ask the players, if you ask someone who knows the game of football, we know how good he is and what he had done for this offense and what he brings. He gets criticized when last year we had a two – thousand yard receivers, a thousand yard rusher, and a four thousand yard passer, that’s a pretty good offense. So I think he gets way too much heat, but because he has been coaching for so long and is such a professional he just lets it roll off his sleeve and keeps looking forward, which is one of the reasons why we respect and love him so much.”


You can watch video of his press conference at Steelers.com.

You can see a few photos from today here.

Check out the latest photo in the Lil’ Fans album!

If you have a photo of your lil’ Ben fan, just send it my way. I will post it in the album!

Check out this piece for the Wall Street Journal written by die-hard Steelers fan Alan Paul entitled, “Black, Gold and Red – Feeling Love for Pittsburgh While Watching Football in Beijing”.

This week on NFL Network: