Home/News/Bensday Q&A with the media
Previous Next

Recap from Teresa Varley, at Steelers.com: 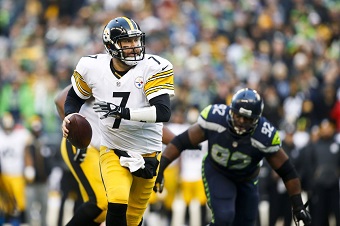 The answer wasn’t just concise, it was definitive when Ben Roethlisberger was asked on Wednesday morning if his preseason enthusiasm for the Steelers was dampened at all after the team’s 33-3 loss to the Patriots on Sunday night.

“No,” Roethlisberger emphatically replied to the reporter’s question.

The reporter followed up. ‘Not at all?’ he asked.

“Not at all,” Roethlisberger replied.

You won’t find a single player in the Steelers locker room who was pleased with the outcome of the season opener, but you also won’t find a player who is throwing in the towel either. They all still believe in each other, believe in what they can accomplish, and that starts with Roethlisberger.

“It’s one game,” said Roethlisberger. “We played the best team in football at their place. We still have a game this weekend and we are excited for it.”

Roethlisberger is the first to acknowledge there is room for improvement, the first to admit the team wasn’t ‘good enough.’ Roethlisberger completed 27 of 47 passes for 276 yards, one interception and no touchdowns and he knows it begins with him as far as improving as the team prepares to take on the Seattle Seahawks on Sunday at Heinz Field.

“I am only going to focus on the quarterback play, and the quarterback has to get better,” said Roethlisberger. “We didn’t execute well enough. I didn’t make enough plays, enough throws and they outscored us.

“I told the guys on Monday when we came in here, we were out there doing our run. I told the guys look up, the sun is still shining. The sky is still blue. The best thing is we still get to play on Sunday. It’s Week 1. We stared a few years ago 0-4. It’s a long season. Half the teams lost their first game. Guys realize what Week 1 was and now we are going into Week 2.

“We’re always trying to improve, get better in all areas of the game. That starts with me. I am going to do my best to get ready for this week.”

The offense was stymied all around, from the ground game which managed just 32 yards, which included a seven-yard scramble by Roethlisberger, to third down efficiency which was a mere 25%. But it doesn’t mean they have to start over. The pieces are in place, the plan is in place. It’s now just going out on Sunday and executing it.

“It’s not like we have to go back to the drawing board and scratch everything out,” said Roethlisberger. “We all need to, starting with myself, play better. It’s nothing drastic. Little things here and little things there. I was just up with Coach Randy (Fichtner) and we were talking about play calling things. That is him and me together, communicating. It’s little things here and there.”


You can read more from Ben’s interview and watch the video here.